Our last day on the site and again the day commenced with rain! However our depleted numbers could not permit adverse weather to hamper clearing and restoring the area of operations so we began by loading the Land Rover with all the surplus equipment that had sheltered overnight under a polythene sheet. 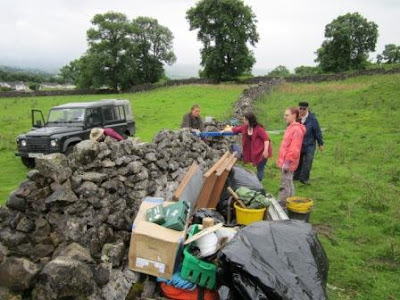 As it is hoped the trenches will be re-opened next year, they were covered in polythene and a layer of topsoil prior to re-turfing – a challenge when protruding rocks have to be cut round and allowed to project. 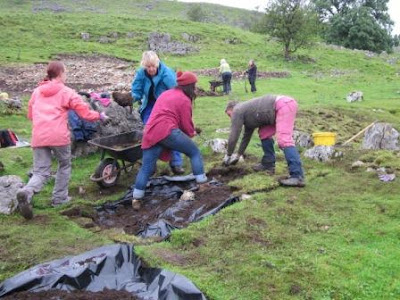 Whilst transferring the topsoil a careful eye was kept for the wild-life, one of the team with a great love and an affinity for wigglies is seen here rescuing a large worm! 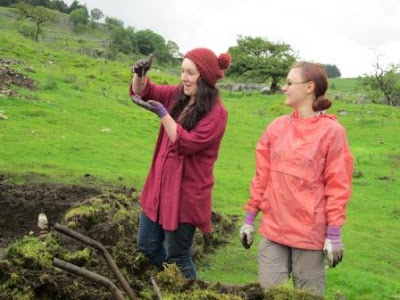 The concluding analysis from Roger as Site Director was that the excavations, and specifically the magnetic susceptibility results, have highlighted the potential that this area holds for providing a greater understanding of not only the DG section, but the site as a whole. 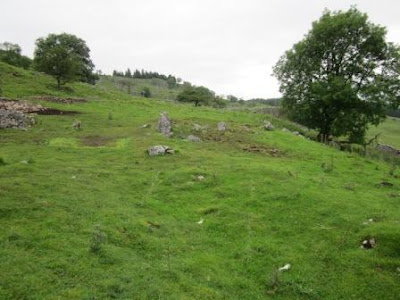 “All gone” – the cleared site, all equipment removed, the trenches restored and handed back to the sheep, rabbits and bird life. 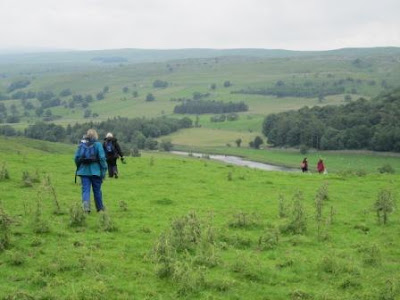 Final retreat off the hill…..

With a fine dry morning, our first task was the removal of the tunnel that had protected much of the site – a delicate operation both with disconnection of the main frames and a careful strategic retreat to safe ground to disassemble the pieces. 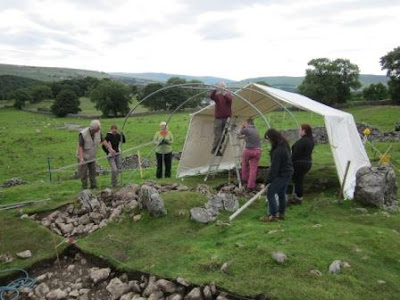 The major emphasis then was to complete the detailed planning of the five excavated areas and a start was made on inking up the completed plans. 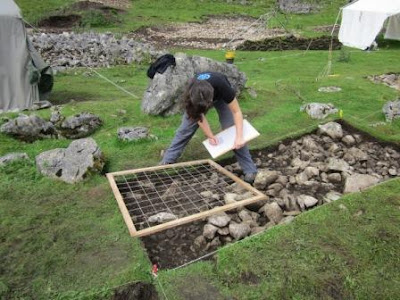 These traditional recording activities were then followed by magnetic susceptibility scanning over the areas still remaining to be evaluated – this activity covered the whole area of investigation within site DG, both unexcavated and opened ground. 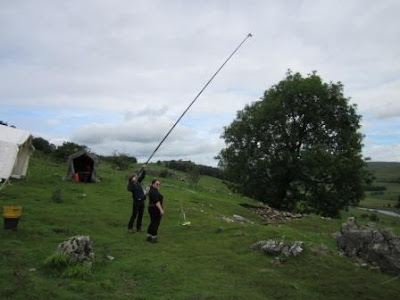 A fellow student came up to the site to trial a device that allowed semi-vertical photographs to be taken – a different and curious use for a fishing rod – it will be interesting to see the results. 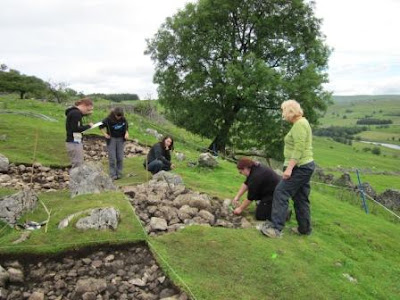 A regular repair task – replacing the edge marker string that had attracted the attention of the resident rabbits – which have moved into our soil pile!

In view of the forecast of more heavy rain overnight our day finished by packing away as much of the dry canvas as was possible – leaving only the Finds Tent bursting at the seams with equipment. 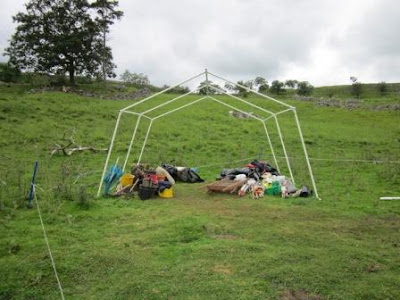 After a night of torrential rain, the river Wharfe was running high and the springs gushed down the hillside at CHW. This, however, earned us a reprieve from the morning site restoration session as it was deemed unsafe on the steep, slippery hillside. 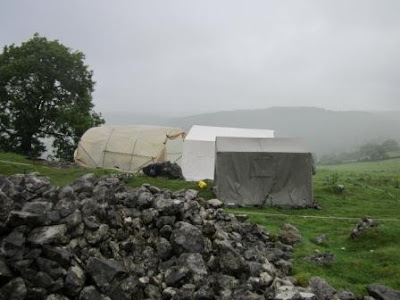 This welcoming scene greeted our arrival on site – the views across the valley were far from encouraging. However, by lunchtime it had cleared with occasional glimpses of the sun in the afternoon.

After taking numerous soil samples, excavation, recording and the employment of the magnetic susceptibility equipment went ahead, in addition to careful drawing and recording of the bakestone. 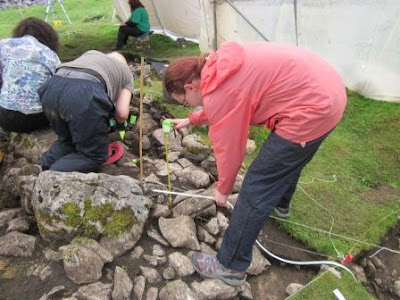 Our visitors today, apart from the woolly quadrupeds with their annoying habit of attempting to devour any tapes left unguarded, were from the Ingleborough Archaeology Group and the Yorkshire Dales National Park. 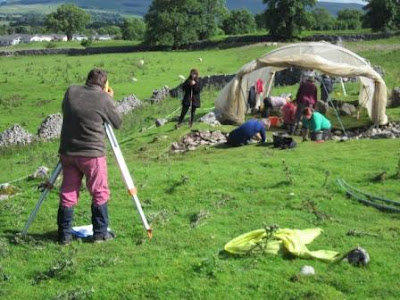 With the arrival of the total station, previously hand measured and calculated locations could be confirmed, and at the close of day we said farewell to another two of our gradually depleting band of workers. 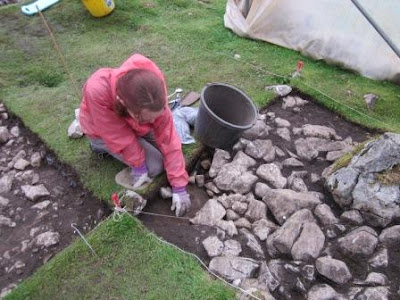 Cleaning up the bakestone


By way of a change today the morning was dry, however things became wet in the afternoon with a series of persistent showers blowing in from the Malham direction. 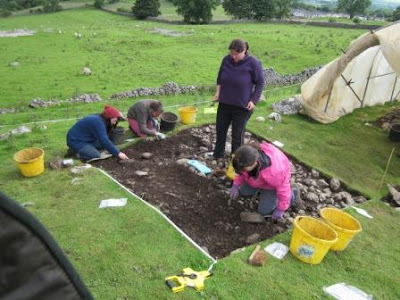 In spite of the adverse weather, the work on site continued and after the inescapable ‘earth and stone moving’ session the planning of trench ‘D’ was completed and more soil samples were taken. 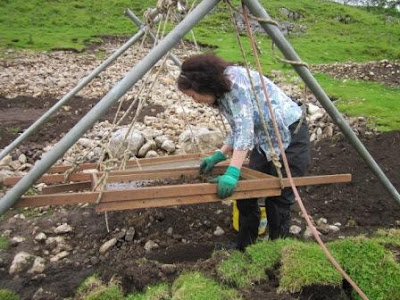 Further excavation now recommenced within the trenches that had already been planned and the sieves were brought into operation.

There was much excitement when an apparently undamaged bakestone (bakstone) was found in situ – some 100mm below the turf – this may prove to be the “Find of the Year” rivalling the quern from 2011. 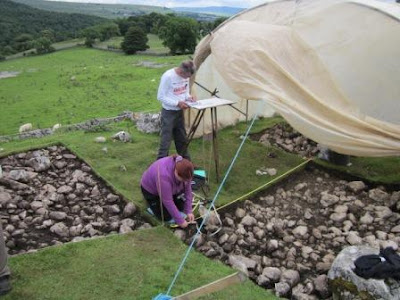 The above photograph gives a good idea of much of this year’s areas of interest, once the turf had been removed and the initial cleaning carried out, so measuring and planning the more significant features could proceed. 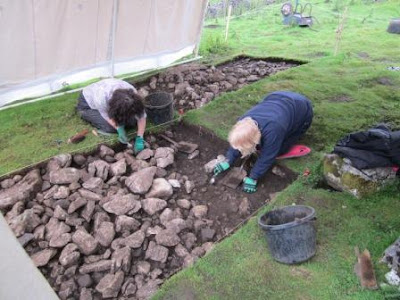 
With the start of the second week, we have said goodbye to some of last week’s participants and welcomed new faces as well as those returning after a weekend away.

Unfortunately overnight the weather changed and the morning was decidedly wet. Following the daily restoration session the continuing rain forced everyone undercover and the long tunnel of polythene sheet and canvas came into its own, becoming cosy at times, with people working in close proximity. 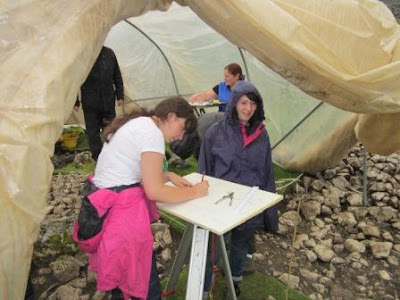 Along the edge of the escarpment, overlooking the valley there are currently five small shallow rectangular trenches, most of which are sheltered by the tunnel – by the end of the day, three plans were completed, one was in progress, and the remaining trench was being taken down to the level of the rest. 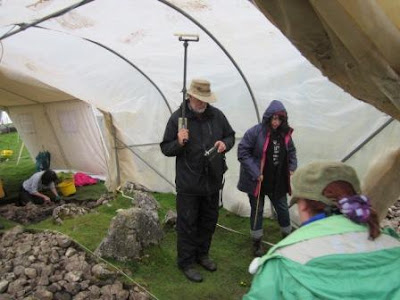 A new feature for the CHW Project has been a concentration on the heat-reddened sandstone fragments found along the hillside for which we have a new weapon in the armoury – nicknamed ‘Roger’s Death-Ray’ – in reality, a device for measuring the magnetic susceptibility.

By scanning the surface in 25cm squares, readings were taken in two of the traenches - after manually recording the raw ata it was necessary to input all the readings into a computer before the data could be processed. 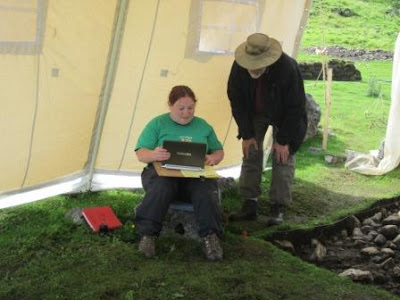 The site was visited by two staff members from the Workers Education Association who were looking into the possibility of involving some of their special needs students in archaeology.

Posted by Upper Wharfedale Heritage Group at 20:28 No comments:

The weather decided to be kind today; it actually managed to stay fine all day and we even had spells of sunshine.


We started the day with the now traditional "Dr Martlew warm up exercise" a half hour (nominal!) period of enforced team building and site backfilling activity, entailing an attempt to return to site DF the extracted material from previous years. 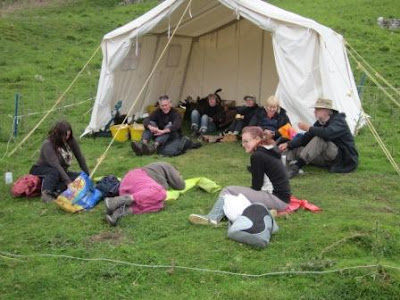 After the morning break the recording of DG recommenced with all participants involved with site planning either by metre grid frame drawing or triangulation of the crucial stones.


As all the rest of the personnel were occupied with planning, the finds team kept themselves gainfully employed by cleaning back the one trench left unfinished. 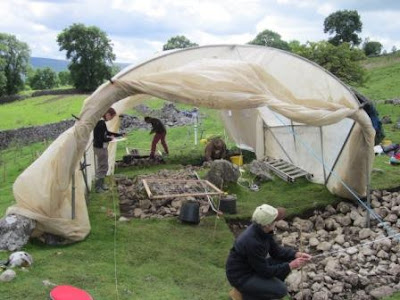 Around the site, the more pleasant weather, though cool, allowed work to progress comfortably beyond the protection of our tunnel. 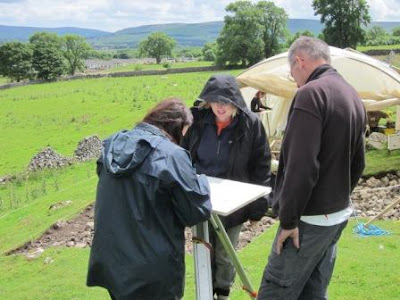 Under the ever watchful eye of the Site Director (and his camera) the work progresses – please note the shadows, indicative of sunshine - a rare commodity this year. 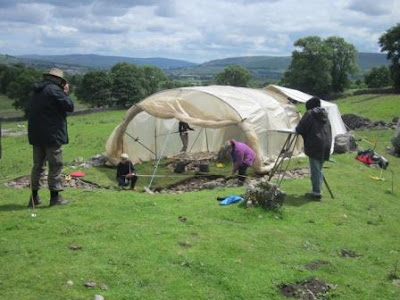 Posted by Upper Wharfedale Heritage Group at 19:57 No comments:

Second Week of the dig

Despite changeable weather the dig carries on.

Pat and Phil are now up there as the Finds Team, and they will be updating us at the end of the week as to how things went on. We shall hear all about their adventures by the weekend.
Posted by Upper Wharfedale Heritage Group at 09:17 No comments: